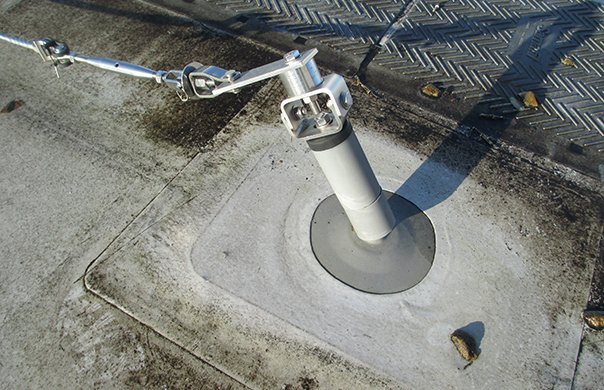 Last week I started this Blog series on inspection of fall protection systems with an overview of your duties when it comes to maintenance of equipment. This week I’m going to look at fall arrest and restraint systems and explain why it’s important to have these inspected regularly and certified annually by a competent person.

What are fall arrest and fall restraint?

According to the work at height hierarchy of control, fall arrest and restraint systems should only be used as a last resort. This is because they provide individual safety protection so are totally dependent upon the worker using the equipment correctly.

These systems generally consist of an anchorage point, a lanyard and a full body harness. When used as fall restraint the lanyard will be a fixed length to prevent the user reaching a fall risk.

What can go wrong?

Systems can often be removed, damaged, tampered with or even deployed. For example, the rubber underside of the weights on a portable anchorage point may be damaged or removed. This rubber is a critical part of the system as it not only prevents damage to the roof but it also increase the frictional tension of the anchorage system. If the rubber is missing the system could move significantly when arresting a fall. Whenever a system has been used to arrest a fall it must be immediately taken out of action as once deployed it’s no longer safe to use.

Any fall protection system should be visually checked before each use and recertified by a competent person on a regular basis. The frequency of recertification depends upon the system, how often it’s used and the environment. As a general rule we recommend that recertification is carried out at least every twelve months.

What should you look for?

Competent inspection and rectification of equipment should include the following areas:

All PPE used with the system must also be inspected and checked that the different items are compatible with one another. PPE should be inspected prior to each use, but more detailed inspections are required at least every six months. PPE inspection should include the following:

If the PPE is used more frequently, then interim inspections would be required every three months.

Fall arrest and restraint systems are vital pieces of equipment when working at height so it’s essential that they’re safe to use at all times, and the best way to do this is to introduce a regime whereby they’re inspected and recertified at least annually by a competent person.

Next week I’m going to look at collective protection such as guardrails and discuss why these also need to be part of your recertification regime.